Freshwater mussels are one of the most fascinating, and also underappreciated, groups of invertebrates. They are members of the Phylum Mollusca, a group that includes snails, marine clams, and fingernail clams. The greatest diversity of freshwater mussels on the planet are found in the southeastern United States, particularly in the Southern Appalachians.

Unlike their marine cousins (marine clams, mussels, oysters), which release their microscopic larvae into the water as free swimming organisms, freshwater mussels have a reproductive strategy unlike any other type of animal. After males release their gametes into the water column and fertilize females, successful reproduction results in viable larvae. Larval mussels first develop in modified portions of the gills of females. To disperse the these offspring, the juveniles turn parasitic. This involves implanting juvenile freshwater mussels onto the gills of a fish host. This is done either by spitting out colorful packets of larvae to be consumed by fish, making a tethered mucous strand that has a distinctive packet on the end, or the most unique method of all.

​One group of freshwater mussels, several of which are found in our western Carolina streams, physically try to lure in the proper fish host. Freshwater mussels have evolved alongside their fish hosts for millions of years, and through a series of genetic mutations, evolved this strategy. These female mussels will modify a portion of tissue within their shell, called the mantle, into an tissue lure resembling a small fish, aquatic insect larvae, or just bright colored tissue. When the right fish host comes in to eat the lure, they receive a mouthful of mussel larvae, which then attach to the gills of the fish. They will then develop for several weeks, metamorphose, and fall off of the fish as a juvenile mussel. At that point, unless otherwise disturbed, mussels remain relatively sedentary, although some species can crawl around locally. It is believed that this unique reproductive cycle developed to allow fishes to disperse the sedentary mussels throughout river systems. 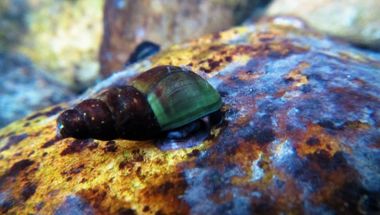 One of the more commonly encountered mollusks in our western North Carolina region are freshwater snails (gastropods). There are two major groups of aquatic snails, those that can respire (breathe) air, called pulmonates, and those that have gills and conduct gas exchange in the water, called operculates. Pulmonate snails have originally evolved on land and secondarily evolved to utilize freshwater habitats. Because they can breathe air, many are more tolerant of lower oxygen aquatic environments. Several types of pulmonate snails can be found along floodplain margins and in backwater areas. They tend to favor quieter areas where stream flows are more moderate, or inhabit undersides of larger rocks in faster flow areas. Pulmonate snails are hermaphroditic, meaning that they possess both male and female anatomy. This allows for self fertilization in the event that traditional reproduction with a mate doesn't occur.

Operculate snails are fascinating, and often visible on our snorkelng tours. These animals have gills and another unique adaptation, the operculum. This is a sort of 'shield' that covers the opening of the shell opening, or aperature. In the event of a threatening stimulus, such as a predator, the snail can pull back into its shell and use its operculum as a means of protection. Operculate snails tend to be found in oxygen rich waters, such as streams in the French Broad watershed, and are moderately intolerant of water quality pollution. They are predominantly diecious, meaning that they have seperate sexes that sexually reproduce. Females lay egg clutches, which hatch into juvenile snails. One group of operculates, the livebearers (Viviparidae) actually birth live young, which develop in the upper portions of the shell.